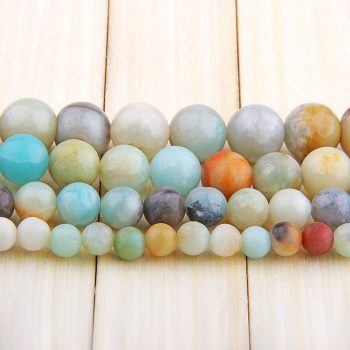 Amazonite, also called Amazon Jade or Amazon Stone, is a green to blue-green variety of Microcline, a Feldspar mineral that forms in short prismatic or tabular crystals or in masses. It ranges in hue from bright verdigris green to paler shades of turquoise, sometimes with white, yellow or grey portions, and can be translucent to opaque. It has a vitreous luster, and when polished resembles finely cracked or spider-webbed marble and displays a Schiller effect of pearly iridescence throughout the stone.

Its blue-green color was once thought to be caused by copper compounds, though scientists in the 1980’s discovered it to be from small quantities of lead and water. It fractures easily and is usually cut en cabochon for jewelry purposes. It is a soft stone and care should be taken when wearing, or in storing with other minerals.

Amazonite is known for maintaining good health in general. It aids in cell regeneration and healing after illnesses, trauma or injury, and relieves muscle spasms. It may be used in treating disorders of the nervous system and blockages in the flow of neural impulses, as well as issues with the throat and thyroid gland. [Eason, 286][Ahsian, 23][Melody, 107][Hall, 50]

Rubbing an affected area with a polished Amazonite is thought to prevent infection, soothe rashes and heal blisters. It is also beneficial in clearing up acne, and may relieve the pain of rheumatism, gout and osteoarthritis. [Megemont, 20]

Amazonite is useful in treating sexual disorders, such as lack of desire, impotence, vaginitis, sexual obsession, and priapism. [Megemont, 20] It is also believed to aid in childbirth. [Gienger, 12]