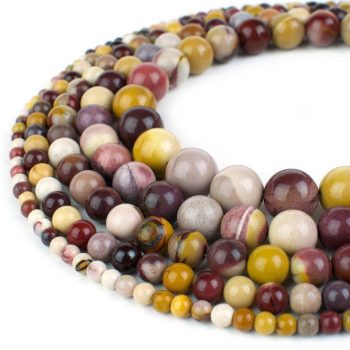 Mookaite Jasper is found only in the Kennedy Ranges of Western Australia in outcroppings near Mooka Creek, the area for which it is named. The Aboriginal term “Mooka” means “running waters” and refers to the numerous springs that feed into this area. Mookaite was formed as the skeletal remains of radiolaria, microscopic protozoa with a hard silica shell, were deposited over millennia as sediment in shallow areas of sea beds. As waters receded, the remains were solidified by additional silica carried in groundwater, along with minerals that produced its beautiful combinations of red, burgundy, mustard-yellow, cream, white, brown, mauve and purple. [outbackmining.com][www.artfire.com]

Mookaite Jasper is described as chert, opalite or chalcedony, or a combination of the three, varying only with the degree of silica, and occurs as nodules in the softer clay beneath the creek bed or as multicolored sheets of chalcedony. Although most Mookaite contains only the chemical remains of the radiolaria, occasionally impressions of Ammonites and other organisms have been preserved. There are also rare occurrences of black dendrite inclusions in Mookaite that, when cut en cabochon, produces a dendrite “tree” formation and greatly increases the value. [outbackmining.com][www.artfire.com][www.agatelady.com]

There are many spelling variations and terms for this stone, including Mookite, Moakite, Moukite, Mookalite, Mookerite, Mook or Mook Jasper, but according to the locals of Mooka Creek who coined the name, only “Mookaite” is correct.

Mookaite Jasper is a physically stabilizing stone thought to boost the immune system and help counter the effects of aging. It is considered highly restorative for tissue deterioration of the internal organs, and useful in treating cystitis, high blood sugar, and disorders of the kidneys and bladder. It supports proper fluid intake and balances mineral content within the body. [Hall, 157][Eason, 317][Lembo, 193][Ahsian, 217]

Mookite Jasper is soothing for the digestive system by reducing stress, and may be used as a gem elixir because it does not over stimulate the body. It may be made by the indirect method, or by letting the stone soak in demineralized water overnight. [Eason, 317][Hall, 155][Megemont, 102]

Mookaite Jasper enhances blood purification and is beneficial in healing cuts and wounds. [Gienger, 59][Eason, 317][Hall, 157] This mineral is also thought to assist in reproduction and aid the body during pregnancy. [Ahsian, 217]