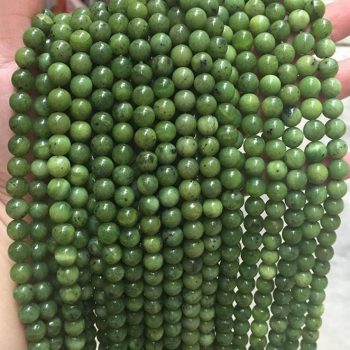 Jadeite has many colour varieties, and while green jadeite is most recognisable as jade, it is also found as a greyish green, red, orange, yellow, white, a pale blue-grey and a pale purple. Jadeite is translucent with a vitreous lustre and occurs as fine grained fibrous crystals. Jadeite is found in Myanmar, Mexico, Japan, Tibet and the USA.

Nephrite is more abundant than jadeite and has only a few colour varieties, ranging  from creamy white to green. Nephrite is vitreous and occurs as fibrous masses. Nephrite is found in Russia, China, New Zealand, Canada and Taiwan.

Nephrite is creamy to opaque and is slightly softer than Jadeite and can show many patterns including dendrites, snowflakes, swirls, and inclusions of quartz, pyrite or other minerals, colours range from light greens to brown, red and black.

Jade is a powerful cleansing stone, enhancing the body’s filtration and elimination organs. It is excellent for treating the kidneys, spleen and supra-adrenal glands, removing toxins and balancing the fluids and water-salt/acid-alkaline ratios in the body. [Hall, 152][Gienger, 50]

It is helpful to the bones and joints, especially the hips, and for treating bacterial and viral infections, cystitis and genito-urinary infections, and bedwetting. [Eason, 266]

Jade has a restorative property, allowing for both the cellular and skeletal systems to re-bind themselves, and assists in the removal of pain associated with the body’s healing of itself. Jade also helps stitches to bind and heal properly, and has been used to diminish cramps and “Charlie horses.” [Hall, 152][Melody, 343] Imperial Jade is particularly useful in healing after plastic surgery or reconstructive surgery caused by a disfiguring illness or injury. [Eason, 265]

Jade is thought to treat reproductive disorders, especially male, and assist during childbirth. [Hall, 152][Melody, 343] Jade may also be used to help teenage girls with anorexia, and for mothers who are afraid of not knowing how to parent their children. [Megemont, 98-99]