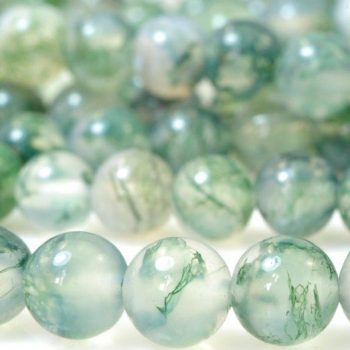 Moss Agate is not banded, and therefore not strictly an Agate in scientific terms; but is included in the Agate family. Agate is a variety of Chalcedony, a mineral of the Quartz family. It is clear to milky white, with dendritic inclusions of manganese or iron that has grown into patterns similar to moss or lichen. Spots of red may occur in some specimens, and occasionally the crystal is dark green with bluish inclusions.

Throughout history and all cultures, Moss Agate has been known as the crystal of gardeners and agriculture. It was considered a miraculous healing stone for tribal priests of the past, giving them power to interact with our human organic system, and was used as a talisman to make warriors strong and victorious. [Mella, 69]

Moss Agate speeds up recovery from illness. It is anti-inflammatory, cleanses the circulatory and elimination systems, and boosts the immune system. It assists midwives by lessening pain and ensuring a good delivery. Moss Agate prevents hypoglycemia and dehydration, treats infections, colds and flu, and lowers fevers. Treats fungal and skin infections. 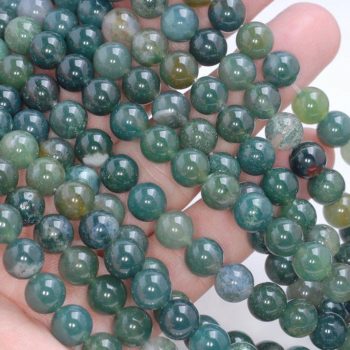 Moss Agate is anti-inflammatory and helps treat infections and swelling, colds and flu, and lowers fever. It is useful for long-term illness and recovery, boosting the immune system, and is thought to prevent hypoglycemia and dehydration. As an elixir applied to the skin, Moss Agate treats fungal and skin infections and irritations. [Melody, 93][Hall, 48][Eason, 253]

Moss Agate is helpful to the circulatory system, regulating pulse and other heartbeat irregularities. [Eason, 253] It cures buzzing in the ears. Wearing an Agate in the middle of the chest strengthens the cardiac muscle, and heals emotional disharmony. [Megemont, 16]

Moss Agate stimulates the digestive system, relieves gastritis, and aids in the elimination of toxins from the body. [Megemont, 16][Melody, 93] Agate may also reduce the symptoms of epilepsy, and for some people guards against sleepwalking. [Megemont, 15]