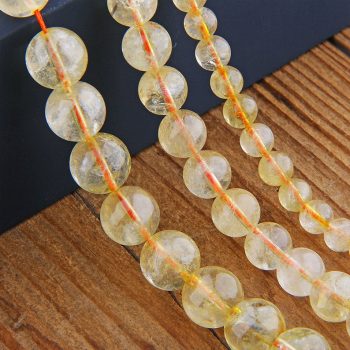 Citrine has been popular for thousands of years and used to be revered for its rarity, though that has changed with time. The ancient Romans used it for beautiful jewelry and intaglio work. It was also very popular for jewelry in the 19th century. During the Art Deco period between World Wars I and II, large citrines were set in many prized pieces, including the massive and elaborate Art Deco inspired jewelry pieces made for big Hollywood stars such as Greta Garbo and Joan Crawford.

Citrine is found in igneous (rocks produced under conditions involving intense heat) and metamorphic rocks, particularly in granite and gneiss. It is also found in classic sediments (matter that settles to the bottom of a liquid). Most good crystals are found as gauge minerals in mineral veins. Citrine is often found in association with amethyst, but it is much more rare than its purple cousin. Because it resists weathering, it is also found in alluvial sands and gravels. The largest supplier of natural citrine is the Rio Grande do Sol state in Southern Brazil. Citrine mines in the US are found in Colorado, North Carolina and California. The gemstone is also found all over the world, in Spain, Brazil, Africa, South Africa, France, Britain, Madagascar and the Soviet Union.

Natural Citrine does not hold or accumulate negative energy, but rather transmutes, dissipates, and grounds it, making it extremely protective for the environment. It works out problems on both the physical and subtle levels, transforming negative thoughts and feelings into positive ones. It is one of only two crystals on Earth that never needs to be cleared or cleansed. The other is Kyanite. [Melody, 209][Hall, 117][Eason, 16] 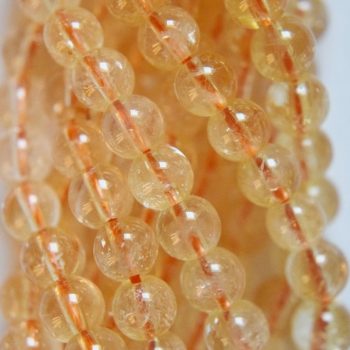 Citrine is a transparent, yellow variety of Quartz, ranging in color from pale to golden yellow, honey or almost brown, and may contain rainbow or sparkle inclusions. The name comes from the French word citron, meaning lemon. It was used as a gem in Greece as far back as 300 B.C., and because of its color, is sometimes mistakenly referred to as Gold Topaz, Madeira or Spanish Topaz, or Safranite. Much of the commercial Citrine on the market is heat-treated Amethyst or Smoky Quartz that produces an enhanced Citrine color, usually a deeper amber or orange-reddish shade. Most Natural Citrine is a pale yellow color. [Eason, 89][Megemont, 60][Simmons, 119]

Natural Citrine enhances physical stamina and energy, supports the endocrine system, and encourages proper metabolism. [Ahsian, 120][Megemont, 59-60] It is beneficial for Chronic Fatigue Syndrome and may aid in reversing degenerative disease. It is thought to balance the thyroid and facilitate the diminishment of growths. [Hall, 119][Melody, 211]

Citrine stimulates digestion, the spleen and pancreas. It helps keep skin, nails, and hair healthy, and is good for relieving skin irritations and allergies, especially those caused by food or chemical intolerances. [Gienger, 28][Megemont, 60][Hall, 119][Eason, 89]

Natural Citrine is beneficial in eliminating infections of the kidney and bladder, and in the treatment of bed wetting, particularly in young adults. As an elixir, Citrine relieves menstrual and menopausal symptoms, such as hot flashes, hormone imbalance and the alleviation of fatigue. It may also be used for nausea and vomiting, and morning sickness. [Eason, 89][Hall, 119][Gienger, 28]