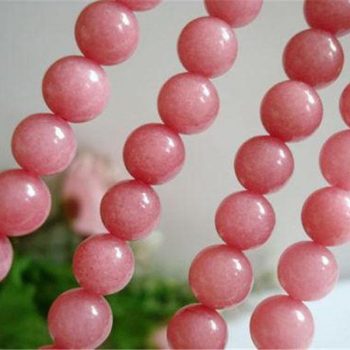 Morganite is often a salmon or pale pink colored gemstone of the beryl variety. The color is caused by the presence of manganese in the stone, and the heat treatments that this stone undergoes enhance its colors as well. It has a high degree of brilliance and often comes in the prettiest shades of pink. Because of these quality factors it has become a popular favorite among women because it’s a great alternative for diamonds.

Morganite is the pink variety of Beryl, a beryllium aluminum silicate, colored by manganese or cesium and forms in masses and prismatic crystals. It is pastel or pale in color by nature, known for its transparent peach-pink color, though it also occurs as soft pink, violet-pink or pale salmon. In rare cases, it can display chatoyancy (a cat’s eye effect), or asterism (a star effect), when cut to highlight these features. Unlike Emerald, another Beryl which tends to have significant inclusions, Morganite is relatively free of inclusions. Another rarity is the availability of large Morganite rough, making large faceted stones possible. The largest to date is a 598.70 carat cushion-cut gem from Madagascar now housed in the British Museum collection. [Simmons, 269][www.gemselect.com][www.jtv.com]

It was discovered in California in the early 1900’s. It used to be known as Pink Beryl until George F. Kunz, chief gemologist at Tiffany & Co. renamed it Morganite in 1911. This was to honor avid gem collector and financier JP Morgan for his mineral and gemological contributions to the American Museum of Natural History.

Aside from being known as a variety of Beryl, it is also known as Cesian Beryl and Pink Emerald. While Morganite is the pink variety of Beryl, the Beryl family also forms in other colors used as gems, such as green Emerald, blue Aquamarine, yellow Heliodor and Golden Beryl, Red Beryl or Bixbite, and the colorless variety, Goshenite. Morganite is also called “Pink Beryl,” “Pink Emerald,” and “Cesian (or Caesian) Beryl.” [www.wikipedia.org][Eason, 55][Ahsian, 270]

Minas Gerais in Brazil produces the most Morganite, but there are also stones that come from Zimbabwe, Russia, Namibia, Mozambique, China, Afghanistan, and the USA.

Morganite can support the heart and counter heart-related problems, illnesses, and disorders. It can help with heart palpitations.

The energies of Morganite can also help in clearing the lungs and relieving any kind of stress-related illnesses. This stone can be used in treating tuberculosis, emphysema, and asthma as well.

It’s also beneficial for people who suffer from vertigo. It’s known to help with larynx, thyroid, or tongue problems, too.