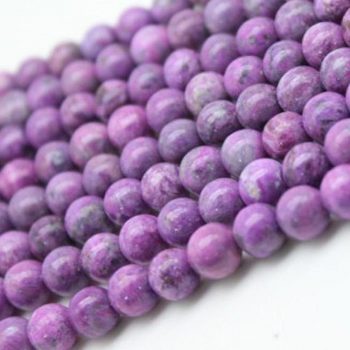 Sugilite is a relatively rare cyclosilicate of the Osumilite group, a potassium sodium lithium iron manganese aluminum silicate mineral. Its form is usually granular to massive, though rarely it forms in tiny prismatic crystals. It is named for Dr. Ken-ichi Sugi, a Japanese petrologist who discovered the first specimens in 1944 on Iwagi Islet, Japan. The mineral’s name is pronounced erroneously more often than correctly, usually with a soft “g” as in “gene” when it should be pronounced with a hard “g” as in “geese.” (soo-gi-lyt) Specimens found in Japan were often a light brownish-yellow rock-forming mineral, classified and soon forgotten.

It is the bright purple lapidary rock found in South Africa that brought its gem properties to popularity, especially as a New Age Stone in the 1980’s. Its color ranges from pale lilac or pink, to reddish-violet into deep purple, with a rich magenta-purple shade considered to be the most precious, especially in the translucent form known as “gel.”

Though Sugilite is found in Japan, Canada, and a few other localities, most deposits of this violet stone come from very deep manganese mines in South Africa. Sugilite is also called Luvulite, Lavulite, Royal Azel, Royal Lavulite, and Royal Lazelle. [www.mindat.org][Simmons, 386][en.wikipedia.org][

Sugilite is a cyclosilicate mineral. Sugilite is also known as Archangel Michael’s stone.

Sugilite is excellent in relieving pain and discomfort at all levels.

Sugilite promotes an understanding of the mind/body connection and how illness and disease may result from chronic stress, emotional turmoil and lack of love. Its energy is believed to bring the nerve centers and brain hemispheres into balance, calming the senses and energetically releasing tension, fear, and psychosomatic disease. It is thought to relieve emotional disturbances and psychiatric disorders, neurotransmitter glitches, or brain malfunctions such as dyslexia, dyscalculia, epilepsy, and motor dysfunction. It is a good stone for those suffering from paranoia, schizophrenia, or post-traumatic stress disorder. Sugilite has also been used to bring support for autism and Asperger’s syndrome, and to relieve insomnia and sleep disturbance. [101 Hall, 198-199][Gienger, 83][Eason, 55][Hall, 280][Ahsian, 387][www.mindbodyspirit-online.com]

Manganese within Sugilite helps absorb negative energy and is an excellent pain reliever, especially for headaches, joint pain and discomfort. It may be beneficial for fighting off viruses and inflammation, and is one of the premier stones to aid in the treatments of cancer by lifting despair, calming emotions, and channeling healing energy into the body. [Hall, 280][101 Hall, 198][Melody, 626][Gienger, 83][Eason, 55]

Sugilite may be useful in treating iron deficiencies, asthma, allergies and other lung-related health issues, as well as increasing physical stamina and endurance. [Lembo, 329] Light colored Sugilite is considered especially beneficial for cleansing and purifying the lymph system. Place on the groin, under the arms, along the clavicles or over the spleen and liver to cleanse toxic blood conditions. [Raphaell, 124][Hall, 280]