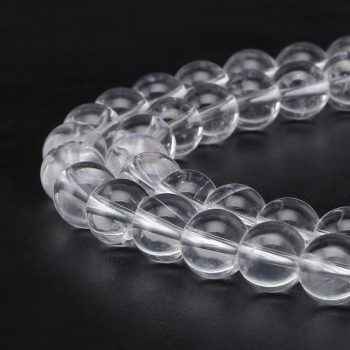 Clear quartz crystals have an incredibly long history of use in all sorts of fields. They are one of the most famous crystals in the world, and have been significant to cultures on every continent, as well as being the base for many other crystals, including extremely precious ones like amethyst.

Quartz crystals are made of silicone and oxygen, but frequently contain other trace minerals and metals, which can give them a wide variety of colors. Quartz is the most powerful healing stone of the mineral kingdom, able to work on any condition. For all its variety, when most people speak of “crystals”, they are usually referring to Rock Crystal (Clear Quartz), the six-sided prisms of pure light and energy known as the Perfect Jewel. In its sparkling light is contained the entire color spectrum.

Clear Quartz, pure silicon dioxide, is also called Rock Crystal or Ice Crystal, from the Greek word “krystallos”, meaning “ice”, because crystal was believed to be water frozen so hard it could never thaw. The prismatic hexagonal crystals have relatively smooth sides and naturally facetted terminations at one or both ends, and may be transparent as glass, milky or striated, often found in clusters and ranging in all sizes. The terminations have different facet shapes depending on the rate at which they were formed, and these shapes are deeply significant. [Simmons, 318][Hall, 225] (See Crystals by Shape)

Throughout history, Clear Quartz has been valued by nearly every civilization as far back as Atlantis and Lemuria, where the sun’s power was believed to be harnessed through a crystal as a source of solar energy refraction. They, along with Native American Indians, African tribes, ancient Egyptians, Aztecs, Romans, Scots and countless other cultures used Clear Quartz in diagnostic healing, meditations and spiritual development, as religious objects and in funerary rites, and to dispel evil and magical enchantments. [Mella, 82][Melody, 506][Kunz, 219]

Clear Quartz is known as the “master healer” and will amplify energy and thought, as well as the effect of other crystals. It absorbs, stores, releases and regulates energy. Clear Quartz draws off negative energy of all kinds, neutralizing background radiation, including electromagnetic smog or petrochemical emanations.

Quartz crystals are said to stimulate the immune system and help with physical energy and resiliency in the face of sickness. Quartz has also been used to treat headaches, migraines, and vertigo, as well as improving general energy for people suffering from lethargy – which also makes it a positive contributor to weight loss! It’s a lot easier to lose weight if you’re constantly filled with energy.

Clear Quartz is a master healer crystal, and may be used for any condition. It is thought to stimulate the immune and circulatory systems, enhancing energy flow and bringing the body into balance. It has been used to treat migraine headaches, vertigo, in stabilizing dizziness or motion sickness, and is believed to assist with metabolism, exhaustion, and weight loss. [Hall, 225][Melody, 506][Eason, 133][Megemont, 73]

A Crystal elixir taken internally has been used to eliminate toxins from the system and to aid in the treatment of digestive disorders, kidney and bladder infections, and to cure diarrhea. The indirect method of preparation is recommended. [Melody, 506][Megemont, 73]