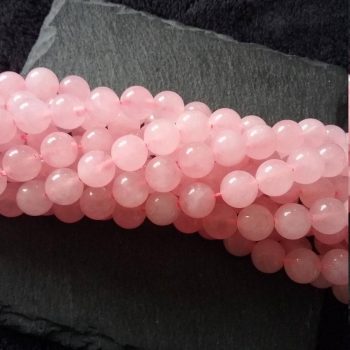 A silicon dioxide crystal, Rose Quartz is one of the most common varieties of the Quartz family. It is found in abundance around the world and occurs only in massive form, with no crystal faces, edges or terminations. It is hazy to translucent, and is usually found in the cores of granite pegmatites. Its name is derived from its soft rose color, which ranges from very pale pink to deep reddish-pink and is due to trace amounts of titanium, iron, or manganese in the massive material. It also contains microscopic fiber inclusions of rutile or a borosilicate similar to dumortierite that can occasionally produce a cat’s eye or “star” effect when polished into cabochons or spheres. The color of Rose Quartz is very stable and will not fade with heat or direct sunlight. [www.mindat.org][en.wikipedia.org][www.quartzpage.de][celestialearthminerals.com]

Rose Quartz is also called Pink Quartz or Hyaline Quartz, from the Greek hyalos, meaning “glass,” and was referred to in antiquity as a Bohemian or Silesian Ruby. [Megemont, 157][Fernie, 179] It was thought for years Rose Quartz, in rare cases, also formed in clusters of small prismatic crystals that were labeled as Crystalline Rose Quartz. However, mineralogists in the 1990’s discovered distinct differences between common Rose Quartz and the rare crystalline specimens, and proposed the massive form still be denoted as Rose Quartz, while the crystal variety should be referred to as Pink Quartz. It is a confusion that is slowly being resolved. [www.mindat.org][en.wikipedia.org][www.quartzpage.de][celestialearthminerals.com] 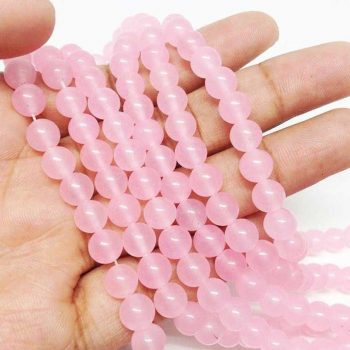 Rose Quartz beads are the natural Pink to Rose hued variety of the Quartz family. The color is derived from the element of titanium. The stone can be transparent to opaque in quality and has a vitreous luster. Mined in Brazil, Madagascar, India, Mozambique, Namibia, Sri Lanka, and the United States.

According to many authors over the decades:

Rose Quartz may be used to sooth burns and reduce blistering if rubbed lightly with a polished stone or used as an elixir. It may also be beneficial in diminishing the appearance of unsightly scars. Use as an elixir to clear the skin, reduce wrinkles and promote a soft complexion.

Rose Quartz may be used to soothe burns and reduce blistering if rubbed lightly with a polished stone or used as an elixir. It may also be beneficial in diminishing the appearance of unsightly scars. Use as an elixir to clear the skin, reduce wrinkles and promote a soft complexion. [Megemont, 158][Melody, 571][Hall, 236]

Rose Quartz stimulates the proper functioning of the heart and circulatory system. It aids in relieving tension and stress, palpitations or skipped beats, and may stabilize irregular heart rhythm. It is ideal for premature babies or young children with heart weakness or disease, or anyone who needs a stronger, more stable heart. [Ahsian, 332][Melody, 571][Hall, 236][Gienger, 74]

This stone is used to clear fluids in the cells of the body and promote the release of impurities. It assists in healing the kidneys and adrenals, and placed on the thymus aids chest and lung problems, relieving coughs and soothing bronchial areas. It has also been used in treating vertigo.[Melody, 571][Hall, 236]

Rose Quartz is especially supportive of the female reproductive system, the genitals and for increase in fertility. It assists in alleviating sexual difficulties, postpartum depression, and is thought to help mothers heal after complicated births. [Eason, 50][Geinger, 74][Hall, 236]