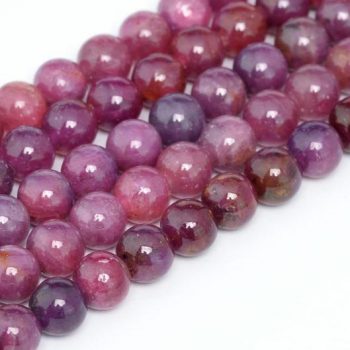 Natural Ruby is one of four “precious” gemstones (including Diamond, Emerald and Sapphire) known its rarity, monetary value, and hardness (second only to Diamond). Ruby is red Corundum, an aluminum oxide mineral with chromium responsible for its rich, red color. The name comes from the Latin word rubeus, meaning “red,” and until 1800 when Ruby was recognized as a variety of Corundum, red Spinels, Tourmalines, and Garnets were also believed to be Ruby. All other color varieties of Corundum are designated as Sapphire. (See the Sapphire page on this website.) [Megemont, 159][Simmons, 332][gemselect.com]

All natural Rubies have imperfections within them, including color impurities and inclusions of Rutile needles known as “silk.” These inclusions help distinguish natural Ruby from synthetics and when structurally oriented so the light shines off the “silk” in certain ways, the inclusions actually increase the rarity and value of the stone.

The meaning of the name of this stone comes from the Latin word for ‘red’. Deposits of this lovely red gemstone have been found in Kenya, Burma, India, Thailand, Cambodia, Russia, Madagascar, Mexico and the USA.

Ruby is a type of corundum, and other members of the family are generally known as Sapphires, and the red stone is commonly found intergrown with a variety of different colors of Sapphire.

In the past other varieties of red stones were called rubies, in particular Red Spinel and some types of Red Garnet, until they were able to work out the differences in the 1800’s.

Ruby is considered a blood stone, strengthening the heart, myocardium, ventricles and coronaries, and stimulating good circulation and blood flow. It is also an aid in treating disorders or disease of the heart. [Megemont, 160][Hall, 251][Eason, 71][Gienger, 75][Melody, 573]

Ruby assists in regulating menstrual flow and alleviating pain associated with menstruation. It is considered beneficial for the reproductive organs, and is often used for treatment of sexual dysfunction, impotence and infertility, early menopause, and as a support for gynecological operations. It is believed to be helpful during pregnancy, especially for older women, and in the optimum formation of children in the embryonic state. [Megemont, 160][Ahsian, 334][Gienger, 75][Eason, 71][Melody, 574] Star Ruby may also be supportive in vasectomy reversal. [Eason, 71]

Ruby is useful in detoxifying the body, blood, and lymph, and is helpful in treating fever and infections. It stimulates the adrenals, kidneys and spleen, and aids inadequate circulation or energy flow in the feet and legs. It may also be used to assist in weight regulation, especially when emotional eating is a cause. [Melody, 573][Hall, 251][Ahsian, 334][Gienger, 75]