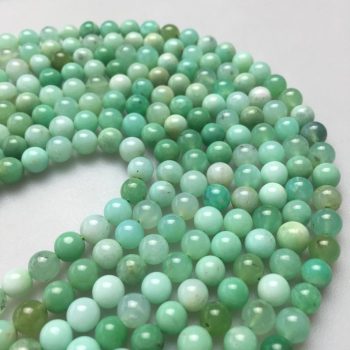 Chrysoprase is a form of silica, much like sand or quartz, but it is made distinctive by the deposits of nickel in the stone that give it a distinctive green color. This is different from emerald, the other most famous green stone, which gets its color from chromium deposits.

The crystals in chrysoprase are so fine that they cannot be seen under a magnifying glass – much finer than the crystals that color amethyst or rose quartz. It is a variety of chalcedony, which is a type of quartz, and is one of the more valuable stones of this group.

This stone has been popular for thousands of years because of its bright color. The name literally means “golden leek” in Greek, because this stone looks so bright that it might have come from nature.

Chrysoprase is a silicon dioxide mineral that that belongs to the chalcedony group of quartz crystals. The presence of nickel in the mineral has altered the normal colorless quartz mineral to a beautiful green translucent stone. The translucent apple green crystal is the most popular of these stones. This stone is sometimes simply called Prase. The color varies from a yellow green to a bright apple green to a dark veined green. This stone is often mistaken for jadeite.

Chrysoprase is found all over the world. There are deposits in Brazil, South Africa, North America, Australia, and central Europe, all of which are very well-visited because of the stone’s beauty. 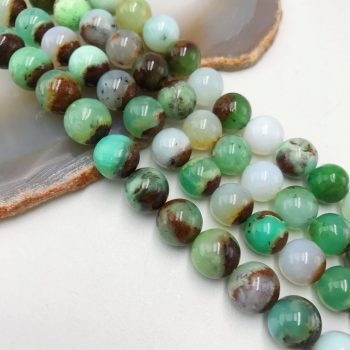 It is sometimes called “Australian jade” because of its prominence in Western Australian mining, and because its color is similar to the vibrant jade stones of East Asia.

For hundreds of years, most chrysoprase was mined in Poland, but the mines there were completely depleted during the Middle Ages. Most modern chrysoprase mining is done in central Tanzania, where chrysoprase mines have been in constant use for over thirty years.

Chrysoprase balances the hormones and treats the reproductive organs, fertility problems, and guards against sexually transmitted diseases. It treats disorders of the lungs and thymus, and soothes the digestive system. Aids mental and physical illness and exhaustion. Treats skin diseases and disorders of the heart. Chrysoprase increases the assimilation of Vitamin C.

Chrysoprase stimulates detoxification and elimination of waste from the body, encouraging the liver and kidneys to remove all substances that are having a negative effect, including an accumulation of heavy metals and other substances that are normally difficult to dissolve in the system. This includes the body’s toxification due to the regular intake of prescribed medications that have built up leading to a reduction of effectiveness of that medicine.

Chrysoprase also helps many skin diseases such as eczema and dermatitis, especially some forms of neurodermatitis. This stone in combination with smoky quartz will enhance the healing of all types of fungal infections. Chrysoprase will stimulate fertility in women, particularly if infections such as STD’s have led to infertility. If your hormones are out of balance and you are having difficulty conceiving, chrysoprase will assist.