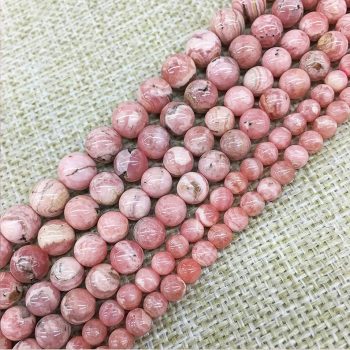 Rhodochrosite is a manganese carbonate mineral of the Calcite group. It occurs mainly as massive aggregates or in granular, botryoidal, nodular or stalactitic forms, though rare, transparent rhombohedral and scalenohedral crystals are found. Rhodochrosite forms in hydro thermal veins of copper, lead and silver mines, and as secondary deposits in sedimentary layers of manganese oxide.

The name Rhodochrosite comes from the Greek rhodos, meaning “rose,” and khros, meaning “color,” and refers to its vivid pink to rose-red color. It has a vitreous and pearly luster, often banded in layers ranging from white or light pink, to those that are nearly red and opaque. Though most Rhodochrosite is in the pink to red color range, it can also be yellowish, orange or brown. It is often confused with the manganese silicate, Rhodonite, but is distinctly softer with white banding, rather than the black veins of manganese oxide present in Rhodonite. [www.mindat.org][Simmons, 327][en.wikipedia.org][davesrockshop.com]

Rhodochrosite is also referred to as Raspberry Spar, Manganese Spar, and most notably as Inca Rose (Rosa del Inca or Rosinca), as the Incas believed Rhodochrosite was the blood of their ancestral rulers turned to stone. It is the National Gemstone of Argentina, where some of the most important deposits are mined, and is the State Mineral of Colorado, USA, where the Sweet Home Mine near Alma and nearby localities produce some of the rarest and most beautiful red Rhodochrosite in the world. [www.mindat.org][en.wikipedia.org][101 Hall, 168][www.gemstoneslist.com][Mella, 101][Eason, 63][davesrockshop.com]

In massive form, Rhodochrosite’s pink and white bands are extremely attractive and often used in semi-precious jewelry, decorative stones or carved into figurines, while stalactitic forms are cross-cut in slices to display their unique concentric bands. Fine transparent crystals are rare and costly, sometimes faceted into gems for collectors, however the softness and brittleness limit it as a gemstone for everyday usage. Rhodochrosite’s main use is as an ore of manganese, a key component of low-cost stainless steel formulations and certain aluminum alloys. [www.mindat.org][en.wikipedia.org][101 Hall, 168][www.gemstoneslist.com][Mella, 101][Eason, 63][davesrockshop.com]

Rhodochrosite contains manganese, an important physiological component of the body necessary for bone growth, tissue repair, and assimilation of minerals. Rhodochrosite is traditionally used to assist the heart and circulatory systems, stabilize blood pressure and pulse rate, and placed at the base of the skull, to relieve tension migraines. It is thought to correct thyroid imbalances, and remove irritants from the lungs, ameliorating breathing problems and asthma. [101 Hall, 168][Hall, 245][Melody, 563][Eason, 63][Gienger, 73]

Rhodochrosite is highly esteemed for its effectiveness when used in elixirs. Taken internally, it supports the relief of infections, such as ear or sinus infections, stomach ulcers, and other inflammations, as well as digestive disorders, such as constipation and abdominal pain, and aids in strengthening the walls of the intestines. An elixir of Rhodochrosite may be employed to bolster treatments for the conditions listed above. (We highly recommend the indirect method of preparation for all internal elixirs.) [Melody, 562][Raphaell, 118-119][Hall, 245][Gienger, 73]

Rhodochrosite is an exceptional stone for directly attacking somatizations, the physical disorders that stem from emotional or mental suffering. Gem Rhodochrosite, or an elixir made from these crystals, can be an invaluable ally for use alongside treatments for healing cancer, liver purifications, coronary issues and other disease. Rhodochrosite is also ideal for nervous system imbalances, offering energetic healing for the myelin sheath that covers and protects the nerves. Though not a cure, it provides remarkable relief for the symptoms of Parkinson’s disease, and some cases of multiple sclerosis, especially when used in conjunction with Rhodonite. It can also be of benefit in withdrawal from caffeine and other stimulants. [Megemont, 153][Raphaell, 118-119, 120][101 Hall, 168][Ahsian, 329]

Rhodochrosite is highly effective for skin disorders. Shingles, a painful viral infection caused by the chicken pox virus, may emerge when one is depressed or in mourning, and some types of rash, hives and boils are physical manifestations of stress, depression and anxiety. A soothing elixir for external skin disorders may be made by placing Rhodochrosite in distilled water (or other natural mineral/spring water), then energizing the mixture in sunlight for several days. Heat the water and soak a cloth in it for use as a poultice. It not only relieves itchy or painful irritations, but penetrates the infected areas of the tissues for cleansing, as well as removing the dysfunctional negative aspects that are present. [Megemont, 153][Melody, 562-563]