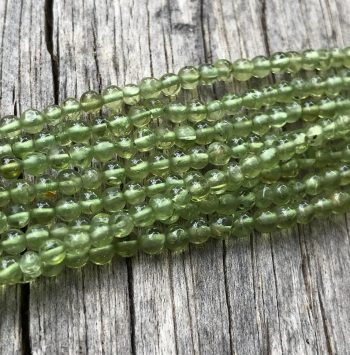 Peridot is the trade name for the gem quality mineral Olivine. It is a magnesium iron silicate that belongs to the Olivine group of minerals. The colours of this mineral is varying shades of green, from yellow-green through green to a green-yellow. It is translucent to transparent with a vitreous lustre. The crystal structure is flattened tabular to box shaped crystals.

Peridot is found in Egypt, Myanmar, Pakistan, Brazil, Germany, Mexico, Ethiopia, Australia and the USA. The best quality peridot has historically come either from Myanmar or Egypt. But new sources in Pakistan are challenging that claim with some exceptional specimens. Possibly the most unusual peridot is that which comes from iron-nickel meteorites called pallasites.

Known as the “true Topaz” in the ancient world, yellow-green Peridot was first called Topazos, named for the obscure and inhospitable Topazios Island in the Red Sea on which it was discovered. These unique gems of Olivine (not the fluorine-bearing mineral we refer to today as Topaz) were mined explicitly for the Egyptian kings, who kept the region so closely guarded anyone trying to approach without permission was threatened with death. The Egyptians held a monopoly on the mysterious island for over 3,500 years, and it was then abandoned for centuries, only to be rediscovered around 1905. It was renamed St. John’s Island, and finally Zabargad, an Arabic term for Olivine, or Peridot. Peridot in its more yellow or golden hues was also referred to as Chrysolite in biblical times, Greek for kreusos (gold) and lithos (stone). The current term “Peridot” is derived from the Arabic word faridat, meaning “gem.” While it is currently mined in many parts of the world, it is still the National Gem of Egypt. [Fernie, 163][Kunz, 66][www.gia.edu][Lecouteux, 320][Mella, 95][www.gemselect.com][www.jewelsforme.com]

Peridot is a powerful cleanser. It releases and neutralises toxins on all levels. Peridot strengthens the immune system, metabolism and benefits the skin. It aids disorders of the heart, thymus, lungs, gallbladder, spleen and intestinal tract. Treats ulcer and strengthens eyes. Balances bipolar disorders and overcomes hypochondria.

Peridot assists in balancing the endocrine system, especially the adrenal glands, which govern the health of the physical body, and acts as a tonic to liven the entire system making it healthier, stronger and more radiant. This stone supports the digestive system and the proper assimilation of nutrients from food, water and light, and may be used to aid optimal functioning of the gall bladder, liver, pancreas and spleen. [Raphaell, 150][Melody, 479][Lembo, 249][Hall, 213][Eason, 282]

Peridot may also be used to help strengthen the eyes with relation to astigmatism and nearsightedness, and to provide relief from, and aid in, the healing of ulcers of the stomach and duodenum. [Melody, 479][Hall, 213][Eason, 282]

Placed on the abdomen, Peridot has been utilized as a facilitator for the birthing process, stimulating contractions and assisting the opening of the birth canal, lessening pain. [Melody, 479][101 Hall, 150][Hall, 213][Eason, 282]

Peridot may be used in conjunction with treatments for psychological disorders, and has been thought to energetically balance the swings of bipolar disorder. It is a marvelous aid for overcoming hypochondria, depression, and melancholy. [Hall, 213][101 Hall, 150][Megemont, 149]