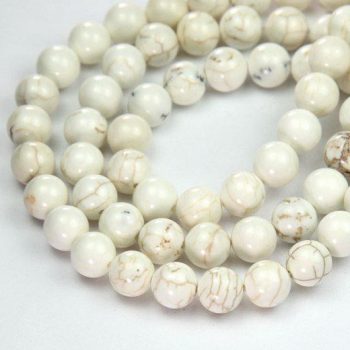 Magnesite is a magnesium carbonate with the same crystal structure as calcite, a calcium carbonate with a hardness and texture similar to White Magnesite and marble. Magnesite forms when magnesium-rich rocks such as serpentine or dolomite are exposed to carbon dioxide-rich water. Believed to be discovered in 1808, magnesite was named for its composition of mostly magnesium.The most commonly occurring color of magnesite is white, with an appearance similar to unglazed porcelain.

This variety of magnesite has long been valued for its ability to be carved. Native Americans, including the Pomo Tribes of California, carved white magnesite gemstones into beads for jewelry and currency. The currency beads were valued so highly they were traded individually versus by the strand like most other valued beads.

Magnesite aids in the absorption of magnesium in the body. It purifies and detoxifies the cells and assists in the treatment of convulsions by acting as a muscle relaxant. Aids healing in the areas of the gall bladder, migraines, vascular, stomach, blood clots, magnesium deficiency and lowers cholesterol. This stone can help to neutralize body odor, and treats PMS, stomach, intestinal, and vascular cramps, as well as the pain from gallbladder and kidney stones. Magnesite treats bone and teeth disorders and can be used to both stimulate and soothe the heart and associated arteries. It regulates body temperature, lessening fevers and chills.