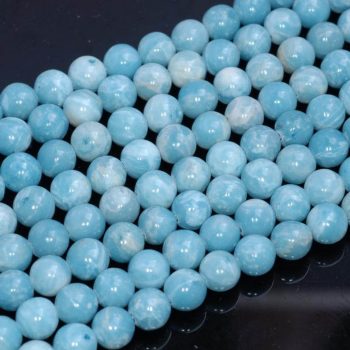 A rare blue variety of Pectolite, Larimar is found only in the Dominican Republic in the Caribbean. It occurs as needle-like crystals, grown together in a solid mass and forms in cavities within basaltic lava. The copper substitution in Pectolite instead of calcium produces beautiful translucent shades of soft blues, white and turquoise marked with streaks and patterns of white, and may contain red or brown areas of oxidation or Hematite inclusions. The more intense the blue and contrast within the stone, the rarer and higher its value. Note: blue is photosensitive and may fade over time if exposed to too much light or heat.

Larimar is also known as the Dolphin Stone, Blue Pectolite, Atlantis Stone, and Stefilia’s Stone. Originally discovered in 1916, it was named by the Dominican who re-discovered it in 1974, taking the first letters of his daughter’s name, Larissa, and the Spanish word for the sea, mar, to create Larimar.

Larimar is said to be particularly helpful for cartilage and throat conditions, and dissolves blockages of the head, neck and chest. It may also be laid on constricted joints or arteries. [Hall, 175][Gienger, 55]

As a reflexology tool, Larimar opens the acupressure/acupuncture meridians at the feet allowing for the recognition of which painful spots lead to which areas of the body in order to remove and clear the disease. [Melody, 476][Hall, 175]

Larimar is used to enhance alternative treatments, particularly those involving heat, light, and water. [Eason, 241] It is an antidote to emotional extremes and helps ameliorate bipolar disorders. [Hall, 175]

Larimar relieves high blood pressure and stress-related illnesses, and may alleviate excessive Fire element energy such as infection, fever and inflammation. It may also be used to treat skin disorders aggravated by stress, such as hives, rashes, eczema and psoriasis. [Ahsian, 229-230]

Believers say that if a larimar is placed over the area of pain, it provides relief. Here are a few of its physical healing properties.

› It heals inflammation and soothes the body.
› It even helps in overcoming the fear of surgery, injections, doctors, etc.
› It helps kill germs, molds, and fungus.
› It may also help in reducing the frequency of hot flashes.
› It brings soothing energy during pregnancy.
› It helps control high blood pressure.
› It helps soothe frazzled nerves.
› It regulates proper functioning of the immune system.
› It helps in treating cartilage and throat problems.
› It brings about a regulation of the thyroid gland.
› It gives relief during cold, fever, and flu.
› It aids in treatment of sunburns.
› It helps in removing blockages of energy in chest, head, and neck.
› It is also said to be effective in the treatment of skin disorders, like eczema, hives, and psoriasis.
› It is also helpful for healing blocked arteries.