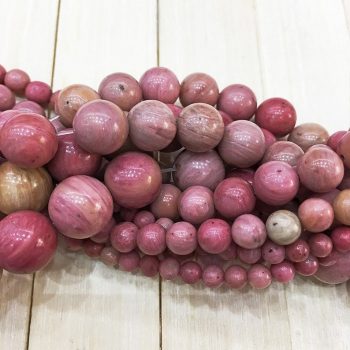 Rhodonite is a manganese inosilicate (chain silicate) and member of the Pyroxenoid group of minerals. It primarily occurs in massive or granular habits, compact groupings, coxcomb aggregates, and rarely as transparent crystals in thick tabular form, often with rounded edges. In massive form, Rhodonite is most often rose-pink to red with black dendritic veins or patches of manganese oxide running through it, though it can also be orange-red or brownish-red. The rare transparent crystals are red or red-orange, seldom exceed 1 gm in weight, and can be cut into excellent gems. [en.wikipedia.org][www.ereferencedesk.com][www.minerals.net][www.gemdat.org][Simmons, 329]

Rhodonite was first discovered in the 1790’s in the Ural Mountains of Russia near Maloe Sidelnikovo, and was called orletz by the locals, Russian for “the Eagle Stone” because people began to notice eagles in the region often carried small pieces of the stone to their nests. It soon became tradition to place small Rhodonite stones in their babies’ cradles as well. The custom was later extended to giving Rhodonite to travelers as a protective stone. Massive blocks of orletz containing Rhodonite and other manganese minerals weighing up to 48 tons apiece were mined from this location and many mines throughout the Urals, used for ornamental carvings, massive inlays and beautiful jewelry made famous by Czars and nobles. It became the national stone of Russia in 1913. [gems.minsoc.ru][www.boliviabella.com][www.malachit.ru][skylineminerals.com]

This mineral was officially named Rhodonite in 1819 by Christoph Friedrich Jasche, from the Greek rhodon, meaning “rose,” and refers to its characteristic pink color. It has been referred to as Peach Blossom Jade, Vermilion Jade, or Pink Marble; and in the Urals as orletz, bakan, Hornstone, or Ruby Spar. It is mined in many locations around the world, including Massachusetts, USA, where it was declared the official state gemstone in 1979. Rhodonite is sometimes confused with the manganese carbonate Rhodochrosite, as well as the high pressure, low temperature polymorph Pyroxmangite. While Rhodochrosite is softer with white banding compared to Rhodonite’s hardness and black veining, Rhodonite and Pyroxmangite share the same general composition and x-ray studies may be needed to make a distinction. [Melody En, 691][www.mindat.org][gems.minsoc.ru][www.gemselect.com][www.ereferencedesk.com]

Rhodonite is an outstanding stone for the restoration of physical energy that has been drained due to emotional trauma/drama and may be used as an aid to help reverse mineral depletion. It supports the flow of chi throughout the meridians of the body, directing essential strength to the endocrine system which increases one’s energy and vitality. It strengthens the muscles and heart, and stimulates circulation. Though not a purifier in itself, Rhodonite boosts the organs and glands, allowing them to purify the body more effectively. It is thought to assist in ridding the body of gallstones or kidney stones, and can support the healing of the liver from disease or damage. [Mella, 102][Ahsian, 330][Gienger, 73][Melody, 565]

Rhodonite contains manganese and is considered one of the best stones for healing injuries, cuts, and bleeding wounds, and for soothing insect bites and stings. It may be useful for reducing scar tissue or birth marks, and aiding skin conditions due to allergies. [Gienger, 73][Hall, 247][101 Hall, 170][Eason, 58]

Rhodonite is reputed to help relieve the symptoms of Parkinson’s disease, as well as some forms of multiple sclerosis, when used in conjunction with Rhodochrosite and provided one continues to follow standard medical treatments. For energetic healing, drink one 8-ounce glass of Rhodochrosite water every day for two weeks, followed by the same amount of Rhodonite water every day for three weeks. For another week, massage the hands with a polished Rhodonite stone. (We highly recommend the indirect method of preparation for internal elixirs.) Rhodonite is also reported to relieve the trembling after heavy drinking, though it is not a cure for alcoholism and must be used in conjunction with standard medical treatments, which may include counseling and/or medication. [Megemont, 153, 156]