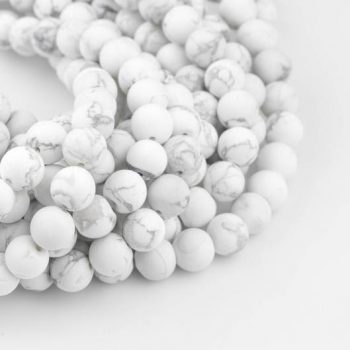 Howlite is composed of hydrous calcium borate and is opaque. Howlite is generally white to cream with fine grey or black veining. It often forms in nodules which resemble cauliflower heads. Howlite is used for cabochons, decorative objects, beads, small carvings or jewelry components.

Howlite is also known by the names White Buffalo, Sacred Buffalo, Lapis Howlite, White Turquoise, Silico Boro Calcite and Kaolinite. It was named after the 19th century mineralogist Henry How who first discovered it in Nova Scotia.

The most notable location of Howlite is Canada, specifically in Nova Scotia, Newfoundland, and New Brunswick. But it can also be found in the USA, Russia, Germany, Mexico, Namibia, Pakistan, and Turkey.

Howlite is frequently dyed in such colors as red, green, blue, purple etc. The dyeing doesn’t affect the healing properties of howlite. ​Some traders dye howlite and sell it as turquoise or other semiprecious crystals. 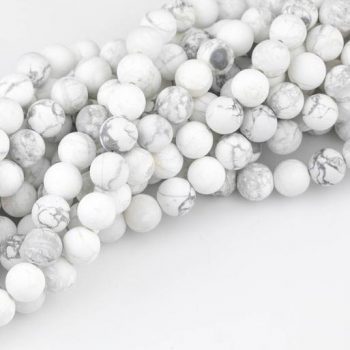 Howlite balances calcium levels in the body. It aids teeth, bones and soft tissue. Helpful in cases of osteoporosis.

It can help cure insomnia when you use it as a gem elixir before going to bed. It can also act as a pain reliever for cramps and other forms of physical pains.

It has been known to aid in the treatment of anxiety disorders and other stress-related illnesses.

Just like Celestite, this stone is good for the endocrine and circulatory system. It can also boost your skin health!

It’s a great memory enhancer and mood stabilizer. It can also improve your learning abilities, especially if you’re suffering from ADHD.