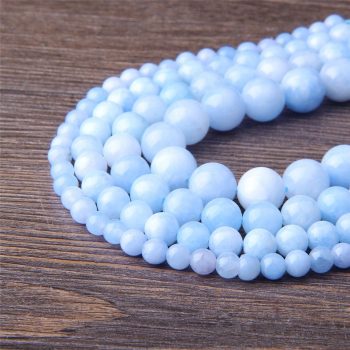 Chalcedony is a member of the Quartz family with a cryptocrystalline structure, perfect for magnifying its crystal energy to soothe and restore balance, from the conscious mind to the inner child, all the way down to the animal self. Its name may be derived from the Greek port city of Chalcedon. The ancient civilizations of Egypt, Greece and Rome used varieties of Chalcedony in jewelry and carvings, and, as gems of antiquity, they were believed to imbue their holders with certain powers. [Simmons, 104-105]

Chalcedony is found in all types of colors, and its varieties are named based on color. The variety Agate is a multicolored form, well known for its distinctive banding patterns. Some forms of Chalcedony, such as Chrysoprase, are intensely colored, while others are light. In blue Chalcedony, the deeper the color, the more desirable the gemstone. The classic Chalcedony varieties are described below:

Agate
Multicolored banded variety, and the most well-known and unique form of Chalcedony. Agate itself has many different known varieties. All Agates contain distinctive patterns, which make each Agate different from the next.

Carnelian
Red to amber-red translucent variety. Some forms of Carnelian are heat treated to darken the lighter tones.

Chrysoprase
Apple green variety; one of the more popular gemstone forms of Chalcedony.

Onyx
May describe solid black Chalcedony, banded black and white Chalcedony (usually in parallel banding), or any Chalcedony with a black base and white upper layer.

Sard and Sardonyx
Sard is the brownish to brownish-red, transparent to translucent variety. The related Sardonyx has parallel bands of brownish to red alternating with white or sometimes black bands.

Tiger’s Eye
Pseudomorph of compact Quartz after the fibrous mineral Crocidolite. Tiger’s Eye is famous for its chatoyant effect and glistening sheen.