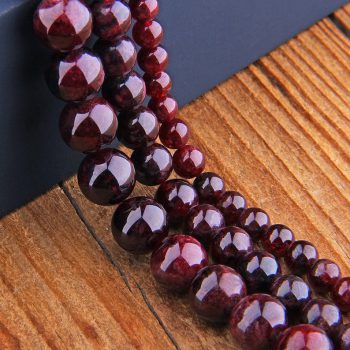 Garnet is the name given to a group of silicate minerals.  Garnet is a 2nd Anniversary gemstone.

The distinctive title Garnet is derived from the Latin name Granatum, a pomegranate, because of the resemblance the granular varieties of Garnet bears to the seeds of that fruit. Garnets vary in size from a grain of sand to the size of an apple. According to the Roman historian Pliny, the large dull-colored “Carbunculus of India” (a variety of Garnet) used to be hollowed out into vessels which would hold as much as a pint.[Fernie, 157]

Garnets were used in the former Czechoslovakia as far back as the Bronze Age, and in Egypt more than five thousand years ago. They were used in Sumeria around 2100 B.C. and in Sweden between 1000 and 2000 B.C. They were also popular in ancient Greek and Roman civilizations. According to the Talmud, the only light on Noah’s ark was provided by a large Garnet. In Europe during the Middle Ages, Garnet was used to enhance truth, faith and constancy, and to dispel melancholy. [Simmons, 165-166] As a Warrior’s Stone, Garnet served as a talisman in the Crusades for both the Christians and their Muslim enemies. [Megemont, 87]

Garnet is said to have been one of the twelve stones in the Breastplate of the High Priest, and has been used as a sacred stone by the Native American Indians, the South American Indians, the Aztecs, the African tribal elders, and the Mayans. It acts with speed to expand one’s awareness due to the flash of lightening contained within, and enhances one’s internal fire to bring creative powers to implementation. [Melody, 290]

Garnets whose color suggested that of blood, were not only believed to confer invulnerability from wounds, but some Asiatic tribes launched garnets from their sling bows, and later as bullets, the principle being the blood-colored stone would inflict a more deadly wound than a leaden bullet. Such were used by the rebellious Hanzas, in 1892, during their hostilities with the British troops on the Kashmir frontier, and many of these precious missiles were preserved as curiosities. [Kunz, 33-34]

Today, Garnet is not only worn ornamentally as a beautiful gem, but is used widely in industrial markets, from watch gears and scientific instruments to sandpaper and abrasives. [Mella, 85]

Garnet regenerates the body and stimulates the metabolism. It treats disorders of the spine and spinal fluid, bone, cellular structure and composition. Purifies the heart, lungs, blood and regenerates DNA. Garnet boosts the immune system and energy levels.

Garnet is thought to have medicinal abilities to reduce body toxins. At times stones were placed in wounds to help heal by encouraging the clotting of the blood. [Mella, 85]

Garnet regenerates the body, stimulating metabolism. It treats spinal and cellular disorders, purifies the blood, heart and lungs, and regenerates DNA. It assists assimilation of minerals and vitamins, including iodine, calcium, magnesium, and Vitamins A, D, and E. [Hall, 136-137] [Melody, 292]

Garnet can alleviate acne, low libido, and disturbances in the cardiac rhythm (except for arterial hypertension, which Garnet can even aggravate). It has been reported to relieve rheumatic and arthritic pain and some psychological illnesses. [Megemont, 87]

Physical healing properties of garnet are believed to detoxify and purify. Garnet gemstones are thought to assist with regeneration, as supported by garnet meaning, and revitalization. Garnet is believed to increase the metabolism and libido. It is thought to detoxify the blood as well as the heart and lungs. Heart rhythm problems may also be alleviated with the use of garnet gemstones; however, it can make arterial hypertension worse. There have also been reports of garnets’ ability to reduce arthritic and rheumatic pain. Red garnet is believed to improve circulation and fight against physical health problems associated with blood.