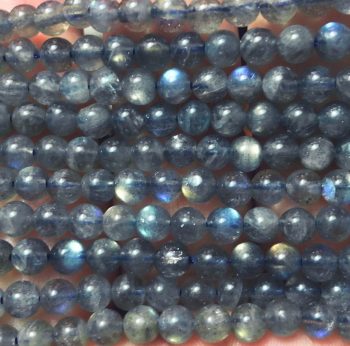 Labradorite is a member of the Feldspar family and is treasured for its remarkable play of color, known as labradorescence. The stone, usually gray-green, dark gray, black or grayish-white, is composed in aggregate layers that refract light as iridescent flashes of peacock blue, gold, pale green, or coppery red. The predominant blue varies within the light, displaying hues from deepest blue to various shades of pale, almost blue-green.

It was discovered in Labrador, Canada, by Moravian missionaries in 1770 who named it for the area. It is, however, referenced in legends by older Inuit tribes, and was known to be in use by the Boethuk peoples of Newfoundland and Labrador. It became a popular gem in Europe in the eighteenth and nineteenth centuries. [Simmons, 225][Eason, 163][Melody, 367]

Rarer varieties of Labradorite include Golden Labradorite, a transparent gold or champagne-color, and Spectrolite, an intense variety displaying the entire color spectrum, discovered in Finland in the 1940s. 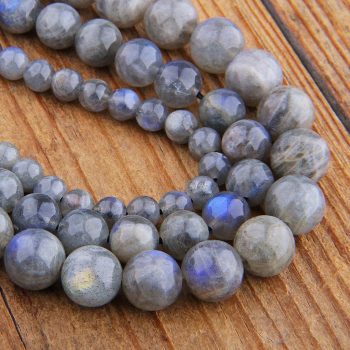 Labradorite is beneficial to the lungs, and may assist with respiratory problems, bronchitis and colds. It assists in digestion, regulation, and metabolism. [Eason, 163][Melody, 368]

It has been used in treatment for the eyes and brain disorders, to stimulate mental acuity, and to reduce stress and anxiety. It may also be soothing during menstruation, for PMS symptoms, and for pain relief. [Eason, 163][Melody, 368][Hall, 170]