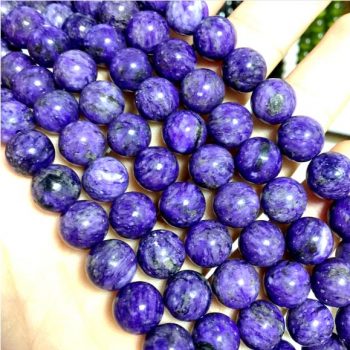 Discovered in the 1940s, Charoite was unknown to the outside world until 1978. Its name is derived from the Chara (or Charo) River in eastern Siberia, Russia, the only site in the world where it is found. The word “Chary” in Russian means “magic” or “charms.” The term “Charoite Jade” is a trade name for Charoite used in various applications as a decorative stone. [www.mindat.org][www.gemsociety.org]

Charoite is a complex silicate containing elements such as potassium, sodium, calcium, barium, strontium, oxygen, silicon, and hydrogen. It is often found with inclusions of microcline feldspar, aergirine-augite, and tinaksite. Its distinctive color, ranging from bright lavender and violet to deep purple, together with its unusual patterns makes it so unusual it is often mistaken for a synthetic. It is found in massive form in dense fibrous aggregates, and may be translucent to opaque with a slight to moderate chatoyancy and a vitreous silky luster. It is relatively soft for use in rings or bracelets, but works well in other jewelry. It is heat sensitive so steam cleaning and ultrasonic methods should be avoided. [Simmons, 107][www.gemsociety.org][www.wikipedia.org]

Charoite treats the eyes, heart, liver and pancreas as well as healing general conditions of the nervous system. Charoite stimulates and regulates the blood pressure and pulse rate.

Charoite generally strengthens the body, grounding high frequency energy into the physical system transmuting illness and disease into wellness. It assists in overcoming exhaustion, and stimulates and regulates blood pressure and pulse rate. It is an excellent cleanser of the body when taken as an elixir. [Ahsian, 108][Melody, 196][Hall, 105]

Charoite is soothing to the nerves, and is thought to calm those with ADHD, autism and Asperger’s syndrome. It overcomes insomnia, promoting a deep sleep, and assists those with sleep problems, including sleepwalking and talking during sleep. [Gienger, 25][Eason, 213][Hall, 105]

Charoite is thought to release cramps, relieve migraines, headaches and other aches and pains. It may be used in treatments of the eyes and heart, and to improve degraded conditions of the liver and pancreas. [Gienger, 25][Melody, 196][Hall, 105][Eason, 213]