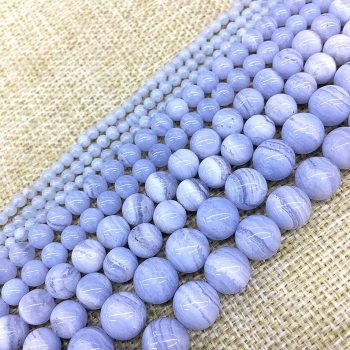 Blue Lace Agate is a variety of banded Chalcedony, a mineral of the Quartz family. It is usually banded in layers of predominantly light blue, striped with brighter blues, whites, and even brown threads of color. Agate is sometimes called the earth rainbow because, in its various forms, the concentric bands in nature form nearly every color the earth can produce, including a colorless form.

Historically, Agate has been discovered with the artifacts of Neolithic people, and was used as healing amulets and ornamentation dating back to Babylon. Its medicinal uses continued through the ancient Greek and Egyptian civilizations, and spread throughout Africa and the Middle East into Russia. Agate sparked a world renowned stonecutting and polishing industry in Germany that flourished from the 15th to the 19th century, and exists today. [Simmons, 6][Mella, 67-68]

Blue Lace Agate helps to strengthen and accelerate the repair of bones, thyroid deficiencies, throat and lymph infections. It soothes red, sore eyes and any skin problems associated with redness and irritation.

Blue Lace Agate is thought to relieve sore throats, aching or swollen glands in the neck, and may aid thyroid problems. [Eason, 219] It helps strengthen the skeletal structure, and is useful in treating arthritis and hereditary bone deformity, as well as the mending of breaks and fractures. [Melody, 83]

Agate enhances mental function by improving concentration, perception, and analytical abilities. [Hall, 39] Blue Lace Agate also aids in fluid balance around the brain. The hydrocephalic may find relief by using a liquid elixir of this stone. [Melody, 83] (We recommend the indirect method of preparation.)

Placed on the abdomen or used as an elixir, Agate stimulates the digestive system and relieves gastritis. It is beneficial for the eyes, hollow organs such as the stomach, uterus, intestines, etc., and heals skin disorders and itching due to insect bites. [Hall, 39][Gienger, 7][Megemont, 16]

Blue Lace Agate is soothing for tension-related headaches and high blood pressure. [Eason, 219] A cold Agate placed on the forehead is generally effective in curing fever. (If the fever returns, however, consult a doctor.) Agate may also reduce the symptoms of epilepsy, and for some people guards against sleepwalking. [Megemont, 15]