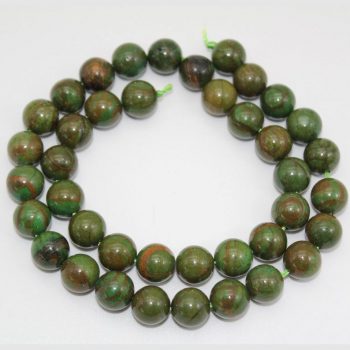 The term Jasper is currently restricted to opaque microcrystalline Quartz, though the ancient iaspis was a stone of considerable translucency, often compared to the Emerald and other green objects. The ancient Jaspers may have included stones which today would be classed as Chalcedony, and the emerald-like Jasper referenced in so many texts may have been more like the modern Chrysoprase. Translucent Green Jasper is rare today as a single color and often of high quality, but along with the opaque variety, is more common in multi-colored or Rainbow Jaspers, Orbicular Jaspers, and as major components of specific stones such as Heliotrope or Bloodstone, Arizona Lizard Stone, and Rainforest Jasper. [en.wikipedia.org][Kunz, 90][Eason, 274]

Green Jasper is a stone of balance that heals and releases disease and obsession. It boosts the immune system and detoxifies all the body’s systems. Protects against pollution. Green Jasper treats skin disorders and dispels bloating. It heals ailments of the upper torso, the digestive tract, and the purifying organs.

Green Jasper is considered highly useful for treating disorders of the stomach and digestive system, the chest and lungs, as well as the kidneys, spleen, bladder, and liver. It helps reduce toxicity and inflammation, dispels bloating and balances fluid retention, and may aid in controlling body odor. Green Jasper also assists in the prevention and treatment of bronchitis, colds, coughs, and influenza. [Hall, 156][101 Hall, 112][Eason, 274][Gienger, 51]

Jasper water is soothing for the digestive system, and is particularly useful as a gem elixir because it does not over stimulate the body. It may be made by the indirect method, or by letting the stone soak in demineralized water overnight. [Hall, 155][Megemont, 102]

Green Jasper is beneficial in staunching blood flow, particularly nosebleeds and menstrual flow, and assists in reducing hemorrhoids. It soothes epilepsy and gout, and may be used to treat the sensory loss of smell. [Megemont, 102][Fernie, 174][Lecouteux, 160][Melody, 345]