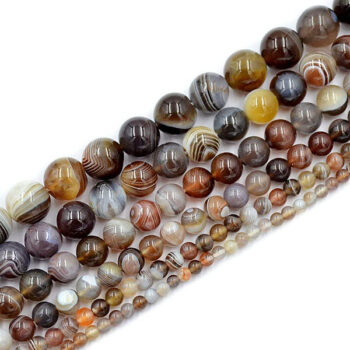 Botswana Agate is a variety of banded Chalcedony, a mineral of the Quartz family. It is predominantly banded in shades of pink and gray, though some layers may contain a muted brown or apricot. Agate has a lower intensity and vibrates to a slower frequency than other stones, but is highly regarded as a stabilizing and strengthening influence. Some collectors consider them royalty among Agates.

Botswana Agate encourages treating the underlying causes of illness rather than the symptoms. It may be used to treat depression and stress, and relieve sexual dysfunctions in both sexes. [Eason, 54][Melody, 85][Hall II, 43]

Botswana Agate is beneficial in ridding the body of toxins and is believed to be good for the skin. It helps stimulate the immune and nervous systems, and aids in brain oxygen assimilation for a healthy circulatory system. [Eason, 54][Hall II, 43]

Agate enhances mental function by improving concentration, perception, and analytical abilities. It is beneficial for the eyes, hollow organs such as the stomach, uterus, etc., and heals skin disorders and itching due to insect bites. [Hall, 39][Gienger, 7][Megemont, 16]

A cold Agate placed on the forehead is generally effective in curing fever. (If the fever returns, however, consult a doctor.) Agate may also reduce the symptoms of epilepsy, and for some people guards against sleepwalking. [Megemont, 15]